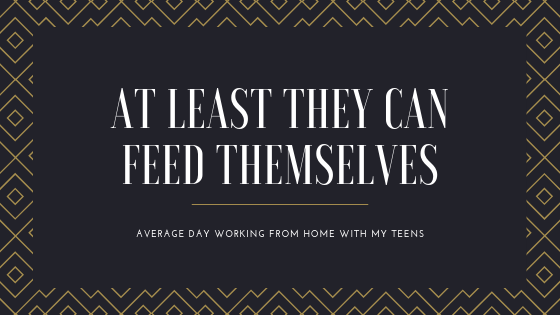 Today started like every other weekday this summer.  I woke up, made coffee, walked the dog and turned on my computer.  I was getting things accomplished and working very productively. It was a pretty quiet morning and nothing out of the ordinary was going on.

We have taken in our nephew’s dog “temporarily” until he finds a suitable apartment that will accept dogs.  We have had Milo for about 3 months now. He is the cutest and sweetest dog in the world. He just will not stop SHITTING in my house.  So, this morning, I once again I woke up to shit on my living room floor. Since the kids were still sleeping I had to pick it up, but you know if they were up they would be all over that!!!

Other than the shit in my living room I was feeling pretty good.  Then at around 10:30 my daughter informs me that she had vomited a few times in the middle of the night.  She was still not feeling all that great and was sipping on ginger ale. She didn’t look all that hot, but that is not usual this summer.  She barely leaves the house and has basically melted into her bed, so who’s to say if she looked sickly or just like a teen on summer break.

We talked for a few minutes and she decided she was hungry and was going to eat a bowl of cereal.  I advised against the milk after being sick, but she said she hadn’t thrown up in a while and was hungry.  I suggested toast, but she ignored me and ate her cereal.

All morning I have been waiting for the bathroom runs to start, but they haven’t come yet, so maybe she had a bug that only lasted a few hours.  She is still resting and sipping her ginger ale, which is wonderful in it self. I mean she is 15 so she can feed and cloth herself. She didn’t wake me up at 4:00am to tell me she puked, she made it to the toilet and she poured her own ginger ale.  What could be better??? So, hang in there moms of toddlers, it does get better.

I continued to work and had a few conference calls, being very productive and getting a ton of work done.  Which never would have happened when my kids were younger! It is late morning, early afternoon when my 14 year old son decides to roll his lazy ass out of bed.

Being the annoying mother that I am, I had to chase him into the kitchen to try to steal a hug, with no avail.  He avoids hugs and kisses like the plague. Which annoys the shit out of me because I need hugs, damn it!

I pour myself another cup of coffee and go back to my office.  Meanwhile, my son is poured his own cereal and retreats back in his room to commence his video game routine.  This routine consists of him sitting at his desk playing Fortnite and screaming at the top of his lungs at the screen.  For some reason people are always camping or they are idiots. He is also DONE playing the stupid game about 10 times a day, but never turns it off.

I am very grateful that he is old enough to sit in his room and play video games without being supervised.  He can eat his cereal without spilling and doesn’t need me to pour the milk! When he is done with his bowl, that is a whole other issue.  His room is always cluttered with empty water bottles and dirty dishes. I tell him regularly that he is going to get bugs or rodents and he doesn’t seem to care, so neither to do.  However, secretly I hope he gets woken up at 1:00am by a mouse scurrying across his face.

I finished off my work day and still have time to take my daughter to her orthodontist appointment, cook dinner and pack for our weekend getaway up north.  Pretty soon my daughter will be driving and she can cart her little butt to the orthodontist for her monthly appointments. Oh! I can’t wait for the day she can run to the store when we run out of milk or eggs.

To sum up my days this summer, I work full time, I see my teens periodically throughout the day, I can cart them around,  I cook dinner almost every night and my laundry is caught up. All this can be done without shelling out a bucket load of cash to some mediocre teenagers to watch my children so I can work, which I have had to do in the past.  I guess it is all a trade off, yes they can feed themselves, but I have to listen to my son scream at the top of his lungs to a computer screen and watch my daughter become one with her bed. I will take all of this over diapers, bottles and temper tantrums, any day!